You have successfully applied this job, you can see, manage all applied jobs and can also update your profile from your Dashboard

What is Employee job Promotion Meaning & its Definition?

Taking an employee to the next level of grade and designation is termed as promotion. A promotion is an upward advancement of an employee which gets him/her to a higher position, better pay and privileges, bigger profile and job responsibilities.

“Promotion is the advancement of an employee to a better job-better in terms of greater responsibilities, more prestige or status, greater skill and especially, increased rate of pay or salary. —Pigors and Myers

An employee’s promotion is elevating him/her to a higher job role with more roles and responsibilities so that he or she is able to meet the specifications of the next profile in cadre.

“Employee Job Promotion refers to the upward movement of employees within the company for a new or higher job role, tasks and responsibilities”.

In human resource management, it is important to have a robust promotion policy communicated explicitly to the employees. Through the job promotion policy, criteria and terms of recommending and approving positions in the organization are governed.

According to a survey, there are a very few organizations, which explicitly announce their job promotion policy and criteria among employees. A well prepared and communicated promotion policy sets the tone for the employees. Sometimes, employee expects a promotion for this performance without realizing his potential.

Eg. An individual contributor performing well in his role, if promoted to handle a team with added responsibilities which he or she may not be good at, can result in a wrong decision. At times, employees fail to perform also if they are entrusted with additional responsibilities.

Therefore, it is advised that recommendations for promotion should be well evaluated through a series of competency assessment so as to understand the gap between the current level of performance and expected levels, in order to avoid any organizational fiasco.

Promotion is a critical stage in the life cycle of an employee as well as for the organization. It is very important to select the right candidate at the right time for promotion. Potential to add more responsibilities and exhibiting good performance in the current role are two different things; organizations often misunderstand the Performance and Potential. The two Ps however similar they may sound are different and are to be assessed differently.

What is the Employee promotion Strategy, criteria at workplace? 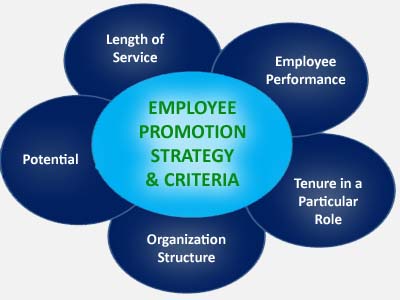 Promotion strategies should be carefully crafted at workplace as these depend upon a number of factors other than just performance. Every organization has different strategies of employee promotion. Here are some commonly used criteria which many of the Indian organization follow:

While these are important points to be considered in an organization’s promotion policy, it is favorable for organizations in any industry to promote at least 8-10% of their employees each year in order to rotate employees between the hierarchies and get the new ideas flowing. For a successful organization, getting new perspective for each task and function is as important as getting revenues and numbers. A new person in a new role will give a new perspective to an existing process which may add a lot of value in the overall value chain of the organization. For the employees, the new designation and grade will give higher authority, more responsibilities, larger span of control, decision making, better pay etc.

Why is promotion important in Human Resource Management for employees and its benefits?

The process of promotion is important in any organization as without it there will be stagnation in the growth and development of employees. If the employee is made to work in the same role, at the same position for years, there will be monotony in his job which is neither healthy for him/her nor for the environment he or she is working in.

Promotions and change of role helps the employees move forward in their career, gives them more challenges, enhances their learning curve, keeps them engaged with the job.

Types of Staff or employee Promotion and its purpose/ objective:

Advantages and Disadvantages of Promotion

Backfilling a position in the organizational hierarchy through promotions is a great idea for an organization who values its employees as it:

However, it may have some cons as well like:

The organization understands that in the process of meeting company’s objectives, the job responsibilities of an employee may change or enlarge. The organization intends to provide maximum opportunities for promotion, consistent with the business needs & excellence, affirmative action, equal opportunity & a steady performance.

A promotion policy signifies management’s commitment to recognize & reward excellent performance. It motivates people to aspire for advancement opportunities within the organization.

A person is eligible for promotion if:

Any exception to the policy shall have special approvals of the CEO & HR Head.

What Are the Benefits of a Performance Management System

How to identify and apply performance management to get the best output from it?

Types of Employee Engagement Process implemented in the companies

Maternity Benefit act – A Sinking boat or a Powerhouse

Maternity Benefit act – A Bliss or a Bleed A Brief case study: Prerna has been working in a multinational compa... Read More

Importance and Benefits of Whistle Blowing Policy in Business

What is whistleblowing?  Importance and benefits of whistle blowing policy in Business   Whistleblowing is ver... Read More

Benefits of Employee Referral Programme Employee referral programme is one of the most effective and trusted means of... Read More